Facebook’s new redesigned desktop site, along with the anticipated Facebook desktop dark mode that you can use or opt into, started launching in March 2020. 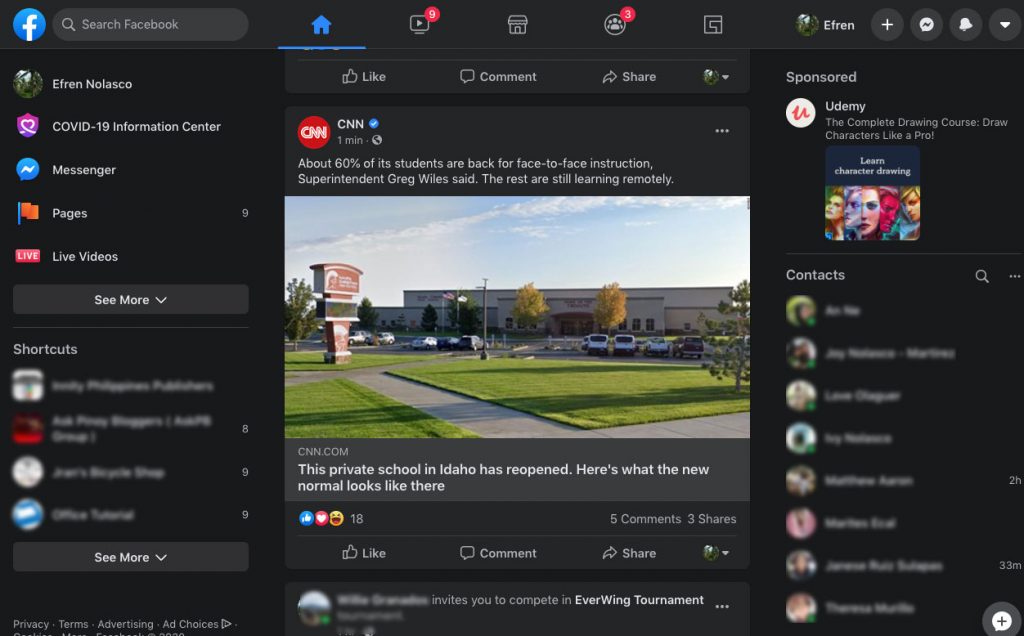 On Friday, May 8th of 2020, the company has announced through a blog post that the launch of its new design has reached the status of completion and is now globally available to everyone right from that moment prior to its limited availability in various markets.

The company stated that the new design will “now be the web experience for Facebook globally,” adding that “it’s faster, easier to use and gives your eyes a break with dark mode.”

With the boredom of people growing, Facebook has designed a new feature for its members. The Facebook desktop dark mode is the feature that everyone is anticipating for in the new design/site of the platform. However, the update also experiences a series of dramatic overhaul in terms of design.

Some of these include the new skinnier layout of News Feed with plenty of empty space on the left and right rails, quite bigger and larger icons, and a menu bar that lets you easily navigate through different parts of the platform.

There is a side bar on the left where the user’s profile link can be found along with a dedicated COVID-19 Information Center page and an access to Messenger chats among other things will be present. The Friends list can be found on the right corner while the feed takes all the space in the center.

In addition to that, a new ‘+’ sign on the top panel will be available for users as well. Not only will it grant you the access to create posts or life events; it will also let you easily create events, pages, groups, and even ads for your business or your product on Facebook.

Read: Here’s How You Can Find Out the Total Time you Spent on Facebook?

The company claims on its blog that users can even “Preview a New Group you’re starting in real time, and see what it looks like on mobile before you create it.”

Basically, the new Facebook feature would highlight a ton of different perspectives. As a matter of fact, there are quite a few better features that the new design has.

In addition to that, the new site is now easier to use and clutter-free with a more streamlined navigation approach for easier discovery of videos, games, and even groups.

Read: How to Activate Dark Mode on Your Android Device

The company notes that the home page as well as other pages will utilize transitions that will buffer and load faster and will have an experience similar to that of its mobile counterpart. Both Android and iOS users alike find themselves waiting for a dark mode option in the mobile application of Facebook due to the wave and change Facebook desktop dark mode has brought about.

Facebook desktop dark mode will somehow eventually be a default option to everyone, but users can now go ahead and utilize the design themselves if they want to. If you want to toggle this design, you can do so by following these steps:

How to Switch From the Facebook Dark Mode to the Regular Mode?

What if you don’t like the new design or feature? Is there an option to toggle back to the regular view? If users do not find themselves liking or enjoying the new site, they can switch back to the classic interface of Facebook for now by clicking that top right arrow again and selecting “Switch to Classic Facebook.”

While the redesign is definitely fresh to the eyes and takes a bit of getting to used to, the new interface was made to keep the whole viewing of the platform easier on the eyes especially with the neat feature of Facebook desktop dark mode.

Read: Tutorial: Here’s How You Can Switch to Messenger’s Dark Mode?

The redesign that includes Facebook desktop dark mode and other features was first announced at its F8 developer conference last year 2019.

Ideally, its goal is to shift the focus of core web experience towards what most people still enjoy using like events, groups, and messaging. However, it isn’t safe to say that it will be the end of News Feed – it’s more of the fact that the Facebook leadership admitted that it’s now an antiquated concept to have an algorithmic feed filled mostly with junk from pages and public posts.

Read: How Do You Activate YouTube’s Dark Mode Feature?

They report that tens of millions of groups are active on Facebook at this moment. They want to stress an emphasis to this feature as according to the company, when people find the right group, it often becomes the most meaningful part of how they use Facebook.

The company said that with this feature, they’ll be able to share more content directly to various groups. It’s going to be as easy as how you do with messages and with the usual News Feed.

You may see more content from your groups in News Feed. And, you will be able to share content directly to your groups from News Feed, the same way you do with friends and family.”

Mark Zuckerberg, the CEO of Facebook himself, has declared the shift of the entire company to be more privacy-focused in terms of products and features as most people have transferred to using Instagram, Tik Tok, Youtube, and other platforms alike.

The company’s priorities will be more reflected in the new interface with a central point towards videos on News Feed (as video ads are still a major part of the company’s revenue) and an easy access to events and groups alongside a redesigned Messenger panel.

They claim that the company did an on-the-ground research in which they spent months talking to people as to how the social giant could make the web experience better for its users.

Try the new Facebook Desktop Dark Mode now and tell us what you think with the new feature! Did you experience a better and an easier time with the app? Or did it become more difficult and more challenging to navigate around with?

How to Reduce Microphone Background Noise on a PC

How to Retrieve Your Pag-IBIG MID Number?