Plasma vs LED vs LCD: Difference and Comparison

Let’s explore the differences between plasma, LED and briefly go over LCD TVs. When you buy a new TV today, you’ll probably see these three types of thin modern televisions: Plasma, LCD, or LED. The choices have remained pretty constant over the past few years, (RIP DLP)

Plasma technology is based on gas interacting with the light. The screens are two pieces of glass with gas sandwiched in between, making them heavy. The glass is smooth, so they reflect the lights and windows in a room, which tends to be annoying. A plasma’s gas provides the fastest refresh rate available, so they are the best for watching sports or action movies. They also have the blackest of blacks and in depth, deep, rich color, so I usually I recommend them if you have a dark theater room. 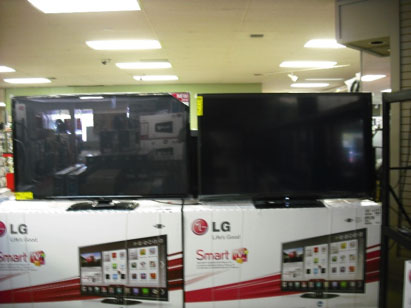 Plasmas do tend to run a little hotter, so they might not last quite as long and they do reflect light on in the room because of the glass screen, but for a dark theater man cave they can’t be beat. In the beginning there were rumors of them leaking at high altitude, but most manufacturers have overcome that hurdle.

They’re more expensive to make, so therefore, they are usually a little more expensive than LEDs at the stores. Panasonic actually recently stopped making plasma television sets because consumers have voted with their wallets and are not buying plasmas near as often as they used to.

LED technology uses light emitting diodes that now almost match the blacks of plasma, but not quite. LED will never match the refresh rate of plasmas gas either. LED are good for everyday use and there screen don’t reflect light as much, so they are an excellent choice for a big open room in the main living area or somewhere bright. They run cooler, so they last a little longer and they’re cheaper to make so they are cheaper in the store.

The plasma and LED wars are nearly at an end. Basically the consumers have decided who won that war with their wallet. LEDs pretty much run the show now.

LCDs, or “liquid crystal displays,” are filled with liquid crystals. The name refers to a crystalline, semi-liquid, semi-solid matter inside a pixel. It shakes the light’s path from a bulb, through a pixel, and right to your eyes. The light source is important: These days, if an LCD doesn’t say “LED” on the box, it probably uses a cold cathode fluorescent lamp (CCFL) to illuminate the picture from the back.

These televisions are the cheapest option, but they are not as sharp as plasmas. The basic technology in LED TVs is the same as with LCDs as a whole—crystal-stuffed pixels and what not. The difference is the light source: LED TVs use “light-emitting diodes” to illuminate their screens. In terms of functionality and final results, it’s a significant distinction. The CCFL’s tend to wash out the pixels compared to a true LED.

The bottom line is if you just want a cheap TV to fill a space, a basic LCD should fit the bill. If you care more about performance and design, an LED set is the way to go. If performance is your highest priority to get a plasma set.

iPhone 6 Price in the Philippines