Facebook’s Messenger has been very up-to-date lately and it has been doing changes that exceeded the expectation of many people – mostly Filipinos. It started when users can now send GIF photos to their friends, when more than two people can participate in a call, and a lot more. Recently, Facebook just unleashed its latest update which is the secret conversations tab where obviously, it is where secret or hidden conversations can be accessed. So in this article, we will be telling you what the secret conversation feature is and what is it for, how you can access or enable it and how it can benefit you.

What is the secret conversation all about?

Even though messenger is already equipped with security and secrecy, it still is not enough to ensure that everything will be just yours. With this new feature, you can be assured that sensitive topics will not be accessed or read by anyone. The secret conversation works like a one-to-one encryption where the person you’re communicating with can only access this on one device. We are used to switching to different devices and getting messages anywhere, right? Well with secret conversations, it’s not like that.

The testing is also equipped with time-frame where you can set a time for a certain message to expire. Say for example, when you want the message to disappear after an amount of time that your friend saw it, it won’t be available in any data storage anymore.

How do I enable this secret conversation feature?

Before anything else, make sure that your messenger is on its latest update so that it has the secret conversations feature. To enable this, go to your profile in messenger; this is the last tab (on the farthest right side). Scroll down until you see the Secret Conversation and turn it on. 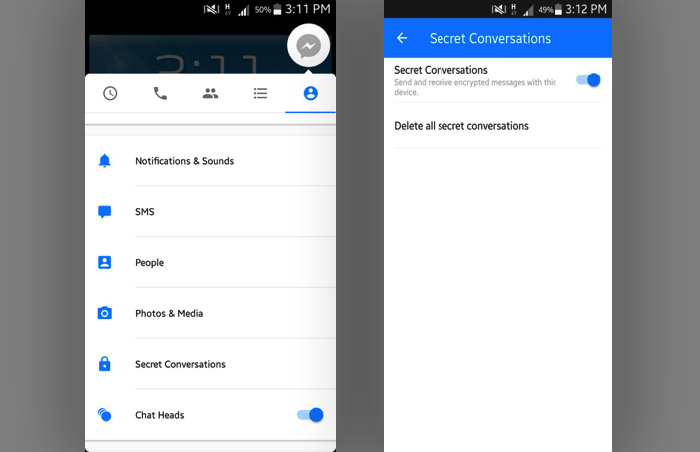 To use this, click on a conversation with a friend. Go to the details tab which is the small letter “i” on the farthest right hand-side tab in the conversation. This will redirect you to a new chat where you will see “Secret Conversation with (Name of your friend) Encrypted from one device to the other). From here, you can send messages, photos, videos, even locations where you can set a time limit to the message. 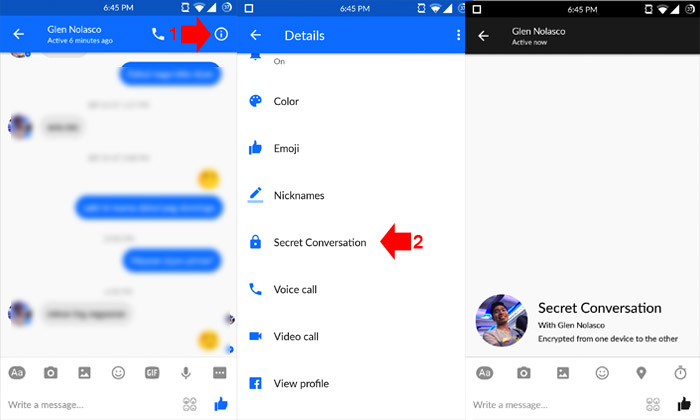 As of now, this feature is only available in the Messenger app on both iOS and Android so they won’t appear on the desktop version or messenger.com. But be assured that we will give you a heads up once it becomes available.

Can I change devices from one phone to another?

As we’ve said earlier, this just appears on one device and cannot be accessed to another but you can change devices. To change, just click on the steps we have provide above and note that the messages from the device you have come from will not be any more visible to the new device that you have. This is a perfect example on how secret/hidden this feature is.

What is this secret conversation for?

Of course, Facebook wants their users to have maximum security and privacy so that users won’t go complaining about breaches, hacks, and other stuff as well.

Messenger provided us with the Secret Conversations to:

Take note that the secret conversations feature that we have now is just a prototype of what messenger is planning and for that, we have no idea yet on how encrypted or hidden it might be. Although what we have now is safe and secure, we still then need to improve this for the benefit and the assurance of us all that our messages will be kept private and secret.

How to Apply for a Bank Loan with Security Bank

How to Compute SSS Monthly Pension