With smartphones taking the mobile phone industry by a wave, it has become essential for the mobile app developers to take special measures in ensuring the flawless functioning of the apps. Irrespective of the type of target audience you’re focusing, make sure your mobile app has all the elements that need to go into a user-friendly application that can be used by one and all.

Visual analytics have emerged as one of the finest techniques of boosting the overall performance of the mobile apps. Through this blog, I’ll be throwing some light on the process of optimizing app performance using the fundamentals of visual analytics.

Visual Analytics- What is it exactly? 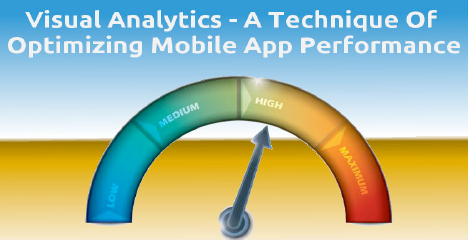 It is beneficial to measure, optimize and understand the application’s UX using a visual app analytics tool. With a wealth of information about how people are swiping, pausing, pinching and dropping out from your app; you’ll be able to better optimize your application. You’ll get to know about the areas which need to be improved for enhancing user engagement, in-app monetization and conversions.

Here’s a listing of the ways in which visual analytics tools can fetch you the app information that can be used for filling up the loopholes in your app:

Visual mobile app analytics tools allow you to view in real-time, where the users are spending a majority of their time, which are the screens, they were on while abandoning the app, which screens have UI issues, what is the actual user flow across the mobile application and a lot more. With detailed, in-app real-time analytics reports, it would become easier for you to pinpoint the key areas within the app that are affecting the overall user behavior.

Touch Heatmaps are aggregated recordings of the user interactions performed with the mobile application. It is a comprehensive report on different app gestures, including taps, swipes and pinches. You can gather a complete insight into the screens your users are tapping on the most. Touch Heatmaps allow you to solve numerous complex issues such as: reason behind the falling conversion rate, reason behind the downgraded performance of a specific page etc.

In addition to this, you can even gather an insight into why users tend to get confused between a call-to-action button and a plain image. By giving your users what they want, you can make them coming back to your app on a repetitive basis. As per a recent research, it has been found that reviewing the touch heatmaps of different mobile apps has helped app owners to improve their CTR(Click Through Rate) by a whopping 13%.

User Recordings is a feature that allows you to dig deep into the behavior of your app user. With this visual app analytics feature, you can actually see your app being used via the users’ perspective. You can easily record the app gestures including swipes, taps and pinches for finding the areas which lack the appropriate user interface(UI) element.

Optimizing an app via visual analytics is perhaps one of the most beneficial methods used by app owners/developers across the globe. If you’re the one who’ll still stuck to the traditional mobile app analytics methods, then its high time to switch to the visual app analytics techniques that would allow you to monitor your app in a better format. Right from making changes to the app’s user interface to re-working on the font, color scheme and patterns, the visual analytics tools will render you the freedom of performing all this and much more with complete amount of ease.

How to Create WordPress Child Theme Without using @import