The Google Nexus 5 was unveiled on October 31, 2013, and released for online purchase on Google Play the same day. Nexus 5 is the most anticipated phones in this whole year, now it’s here now it’s official and this is the full review.

Just like the Nexus 4 it comes in black or white, white color is really not actually pure white it’s actually more shaler of white-collar to prevent it from getting noticeably dirty very quickly and that works but the Nexus 5 has a very understated design like some other Google hardware.

LG manufactures Nexus 5 but it looks almost nothing like the LG G2 that it’s technically based off a soft touch finish on the back and it’s totally flat like very little current until you get into the outside edges and there’s a camera bop but one thing that really strikes you when you’re holding Nexus 5, is just how late it feels in handy for speaking about the box it feels unreasonably late but it’s only 130 grams so way lower than the Nexus 4 and HTC One that’s made of metal actually the same way as the Galaxy S4 but it still feels more solid in the hand because that soft touch finish on the back the rubberized back. 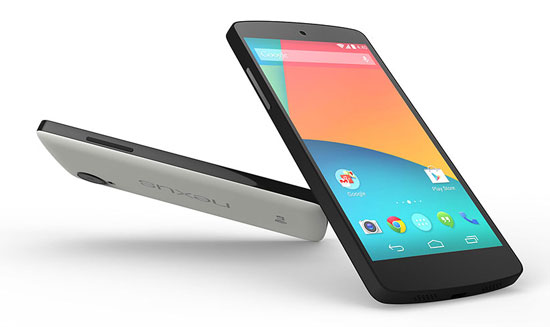 Nexus 5 is a five inch 1080p display with 441 pixels per inch (ppi) it’s incredibly sharp as you’d expect and it’s an LCD display so it’s super high brightness in daylight, you go from a ton at angles and overall a very accurate, pleasing display to the eye, the only possible complaint I could have about this panel are the contrast ratio sometimes it looks a little bit washed out and the fact that I can see the LCD panels backlight when holding the phone at an angle. The bottom and the notifications up top are transparent, so the display dominates a big wall on the front.

The thing that I don’t like in this phone is the speaker, you try to cram the same specs as a high and seven hundred dollar phone into a three hundred and fifty dollar phone, you never believe have to make some sort of shortcut and speaker at the bottom are one of the shortcut in Nexus 5. It’s very bad for any smartphone to put the speaker at the bottom because if you accidentally cover just that tiny area with your finger, you ruin the audio and have to readjust your hand.

Other people have been disappointed by in the hardware is the camera, because a lot of people are expecting the camera to be high and as well it’s not. With 8 megapixels behind the camera, it’s better than the Moto X and the Nexus 4 not as good as the Galaxy Note 3 or let me a 10-20, somewhere in the middle average the outer situations in brightly lit scenarios where you’d expect any camera to do well it does find a shelter decent with sharpness and detail, and colors are accurate which is nice not every smartphone gets the covers right.